Canon EOS M3 and Canon EOS M5 are mirrorless cameras with APS-C sensors, which I have mentioned several times in this blog.

That's how I ended up buying this camera. "APS" is an abbreviation for "Advanced Photo System", which was jointly developed by Fujifilm, Eastman Kodak, Canon, Minolta, and Nikon, and was launched in April 1996 as a new world-standard photographic system.
"APS" is not the name of the photographic film.

The film used was IX240, a special film for the new standard.
The "IX" in the name of the standard stands for "Information Exchange".
Like Exif on a digital camera, the settings at the time of shooting, date and time, print size and number of prints, comments, etc. are recorded on the magnetic surface coated on the film and can be used when printing.
The 240 is derived from the film width of 24mm.

After further research, I found out that it is a photographic system that did not become popular at all due to various reasons, and that the IX240 production ended in 2011.
It history makes me sad, so I'll stop there. The exterior features a stainless steel alloy finish and the body is shaped as a circle around the lens mount for a futuristic look, these are the words of Canon. Yes, it is indeed cool.
I remember the futuristic model I envisioned back in the 1990s was something like this.

This means that the APS-C sensor in digital cameras is derived from the C size above.
They're not exactly the same size, though. The basic settings and usage of the aperture, shutter speed, etc. are the same as those of EOS SLR cameras, but the position and shape of the dials are unique.

It's amazing that a camera of that time could support shutter speeds up to 1/4000 sec. The only thing I can't stand is the position of the strap hole.
I don't know why they chose this position!
When the strap is attached, it's very difficult to operate. Using a multi-BASIS AF sensor arranged in the shape of I+I, the EOS IX features Eye Control, which allows the camera to focus by simply gazing at one of the focus points (optional manual selection is also possible). One-touch film loading.
The camera is equipped with a function that allows the user to change different types of IX240 at will, without losing a single frame.
Together with the magnetic IX (information input/output) function, this is the most important feature of the "Advanced Photo System".

Well, "Advanced Photo System" was virtually over.
Today, cameras are naturally second-hand, and IX240 is only available in expired form.

However, there are many stores that still offer film development services in Japan.

That's why, I'll continue with the results of shooting and developing in the next post. ;) 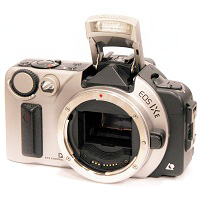